I apologize for the long silence.
When I as well as you became in December,
it had these busy days.
I moved about the holiday furniture,
indoor repair and preparations for X-mas＆Newyear-day,
and every day.Such inside participated because
Michael Denton CEO of Boeing Japan would hold
the lecture meeting in Utsunomiya.
Interestingly in his talk, GDP in the world will be
that Boeing assumes 2.2% of growth
for 20 years from now on.
And say that it is an airplane of the dream
in which just B787 tackled it having risked
the future of the company of the Boeing
on the next of B747 or B777.
Although Michael was a quiet narrative style
which close resemblance to Steve Jobs, he felt the passion
over Americans' business for the sincere posture
which replies to the question at
an attendant fervently very carefully. 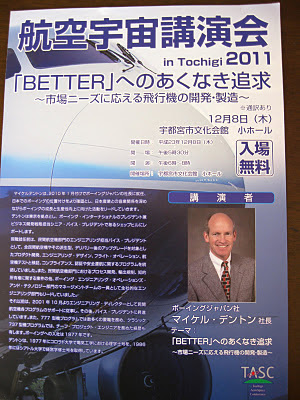 Delight in the night

This evening, I drank with Mr. Ussey of the leader a band's,
and my ”Master”. There is only an end of the year truly
and the tavern was prosperous.
I also drank some cups of beer after a long time,
and have got drunk with a good feeling completely.
If it talks with Mr. Ussey, many always studied things occur.
Although he is 12years junior to me, the opinion of which
a farsighted view was taken serves as a shot in the arm
of the life my future. Although it thought that
that I drink alcohol the past several months had useless
time and being avoided, isn't such time also precious happily?
He thinks whether to be what since it is strangely gloomy
in inside of a shop although coffee was drunk
in Starbucks to return, and, seemingly and a store
are the events of tasting coffee in darkness by a theme called
"Delight in the night". Year-end night was passed
in the extravagant feeling, looking at the candle on a table. 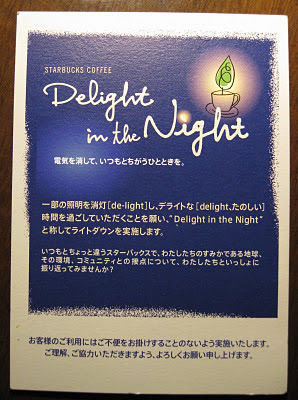