34L runway in Narita is "WIND 270 at3".
Singapore A380 are Landing just now.
CNN had reported that the defect (some parts are cracked)
became clear on the parts inside the wings of A380.
I want you to be unrelated to an aircraft accident
miserable only to A380.
I considered to the appearance,
looking at graceful Landing. 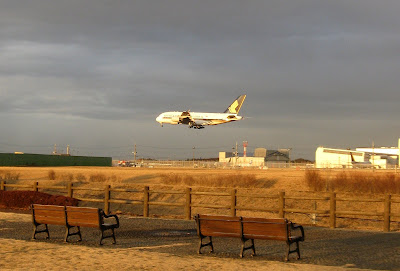 The following photograph is arround the second terminal of
Narita shoted from Room 611 hotel”Narita Toyoko-Inn”.